S2E1: The Good, The Bad, & The Ugly: The Westworld Season Premiere

Published by Cristina Escobar on April 24, 2018

The season two premiere of Westworld went live last night and so much happened. SPOILER ALERT: The hosts have taken over the park! The hosts are all dead! The humans are taking back control! The newly-in-control humans don’t know there’s (at least) one host in their midst! There’s a lot to untangle.

I was watching to see if this new season would serve as a referendum on the toxic masculinity that propelled the first ten episodes. Yes, the nudity was still explicit (hello genitalia!) and the violence was still intense (particularly the gory scalping of a Native American character – reliving this genocide in squishy detail only serves to dehumanize real indigenous people). But last night I was particularly disappointed in how the show insisted that its most badass ladies – Maeve and Dolores – need romantic storylines.

These women do NOT need romantic love! Thandie Newton’s Maeve can control other hosts with a turn of the phrase, outsmart and outgun any human, and do it all in stilettos. Why must we waste our precious Maeve screen time pretending to care about her relationship with Rodrigo Santoro’s Hector Escaton? Yes, we all know she’s driven not by romantic but rather maternal love. Still the scene with Hector was annoying. Their reunion contrived. The show didn’t give Dr. Ford a love interest. No one’s vying to be Bernard’s second wife. Men can exist and be interesting and be the subjects of shows without relationships. No reason to saddle Maeve with one.

Perhaps you could argue that Maeve’s pairing flips the script. Hector is her sidekick. He exists only to teach us about Maeve. Yet, this inversion of power doesn’t point to a new world order. It just shows the same old hierarchy, replicated with different players.

You see the same with the use of nudity in this episode. Officially, the show’s creators were using nudity to dehumanize the hosts (although, it’s hard to believe the side-effect of titillating the audience wasn’t also a driving force) in season one. In last night’s episode, we saw female host Maeve ordering male human Simon Quarterman’s Lee Sizemore to strip. And he does, with the show going to so far as to show full frontal male nudity – a rarity even on HBO. And is this scene suppose to be a powerful symbol (pun intended?) that the old masculinity is out and something new is coming to take its place? Or is it just another role reversal? Maybe robots and women are now in control over humans and men but the structure of power remains the same. Nudity is still weaponized, vulnerability and sexuality are still things to exploit.

Which brings me to Evan Rachel Wood’s Dolores. In season one, Anthony Hopkin’s Dr. Robert Ford crowned himself the ultimate puppet master and patriarch. In last night’s episode, power is dispersed, falling mostly with women and people of color – Dolores, Bernard, and Maeve. These are the people – who we usually see depicted as sidekicks and damsels – taking control, using their agency, and driving the plot.

With her new-found agency, Dolores becomes judge, jury, and executioner, choosing which humans and even which hosts should live or die. In one particular scene, Dolores oversees the hanging of a group of humans. In the end, the row of them pleading for their lives “doesn’t look like anything” to her and she rides off, leaving them alive in their nooses. Dolores has taken the ultimate power over humanity – apathy towards their fates.

When it comes to her fellow robots, Dolores is the clear leader, making decisions and giving orders. But not all hosts are welcome in Dolores’ gang as becomes clear when we see the memories of a dead member of Ghost Nation – just before shooting him, a righteous Dolores says “not all of us deserve to make it to the valley beyond.” She is now the decider of fates like Dr. Robert Ford before her. But she uses no more fair or just a system than her predecessor. Both are motivated by their own quest for power and control. Both use violence as power. The old systems are in tact just with different people in control.

I’ll be tuning into the next episode, watching to see if Maeve and Dolores can turn their coup into a revolution. Perhaps now that they are free, these women robot hosts can invent an identity outside of the toxic masculine confines that created the Westworld park and hosts. Perhaps a world where everyone plays themselves is not full of violence, rape, and murder but rather something else. Or perhaps not. 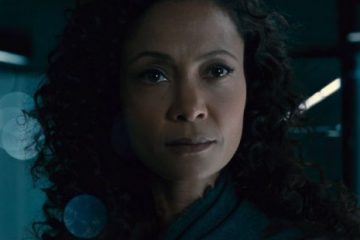 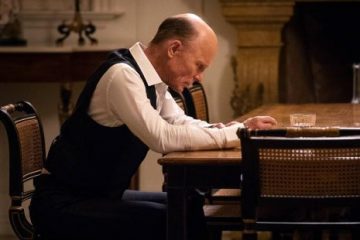