Westworld, A Utopia for Toxic Masculinity?

Published by Cristina Escobar on April 20, 2018

What is it to be human? Are sexism and bigotry and violence part of our nature? Can the stories we tell, the culture we create, free our humanity from our baser instincts? Or do these artistic endeavors simply replicate existing power structures? These are the questions explored in Westworld, HBO’s addictive, sci-fi/western mash up, returning Sunday.

As any fan knows, the show’s creators have envisioned a fantastical playground where humans can live out their deepest fantasies amidst robots that look, feel, smell, and act like human beings. But what do the flesh and blood people do in this fantasy world? They rape and murder and pillage. For fun. With no consequences possible, the people – the male people (the stories of women guests are largely absent from the show) – who go to the park spend top dollar to embrace what I would call “toxic masculinity.” These men find fulfillment not in the tender ability to love and create but rather in finding and exploiting weakness in others. This desire to dominate, even if means destruction – particularly when it means destruction –drives them into Westworld and propels the narrative of the show. In fact, the more time men spend in the park, the more destructive they become. Just compare Ed Harris’s Man in Black to Jimmi Simpson’s William if you’re looking for an example. It is a dark vision of humanity, one where the lowest, meanest consequences of patriarchy are our truest nature.

Outside of the guests, the other humans we see on Westworld are the workers, creators, and board members who created the park and run it. Led by a dizzying and devious Anthony Hopkins as Dr. Robert Ford, these people are perhaps a more representative slice of humanity than the park’s guests, who are supposed to be the world’s elite, the richest of the rich who can afford the ultimate lavish vacation.

Here we see women, striving and plotting, seeking control and trying to do right. There’s Shannon Woodward as the plucky engineer Elsie Hughes, investigating the robot’s strange behavior and seemingly on the verge of revealing something dark about the park. There’s Sidse Babett Knudsen as the take-charge board member Theresa Cullen, who stands in Dr. Robert Ford’s way of having complete control over the park and its hosts. But what happens to these white women? Well, spoiler alert, they both seemingly die in the first season. In this universe where toxic masculinity is the defining feature of humanity, their brand of female opposition is met with vicious violence. Women are not safe, inside or outside the park – female bodies remain the site of violence, whether those bodies are robot or flesh and blood. One can only hope Tessa Thompson’s Charlotte Hale will provide an alternative model towards resisting this order, and foil Dr. Robert Ford in a way the women before her could not. 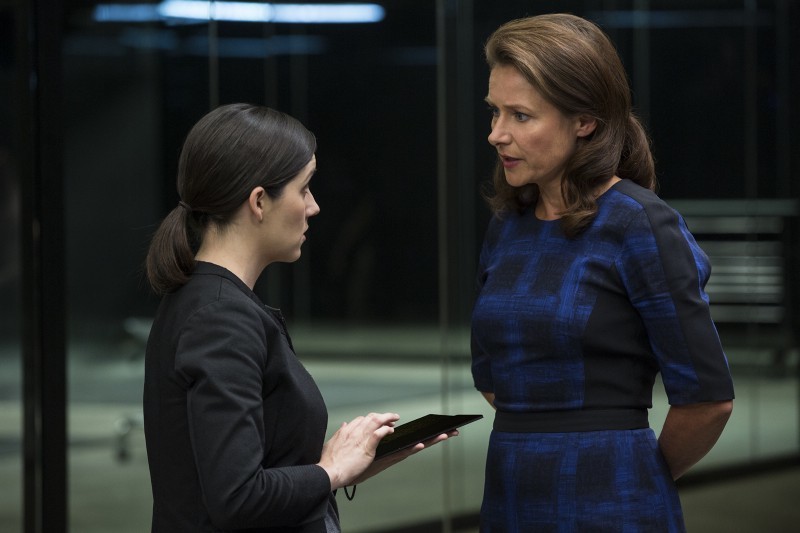 Which brings me to the robots. Here the women are strong. They are the center. Thandie Newton plays Maeve Millay a “host” who currently plays the part of the saloon’s madam but who previously served as a mother archetype before her daughter was killed and something inside her broke. With this trauma lurking in her background, Maeve discovers the truth about her existence and uses her cunning and mechanically-enhanced strength to earn her freedom and, perhaps even, the freedom of her peers.

Evan Rachel Wood plays Dolores Abernathy who on the surface seems like the embodiment of traditional, fragile femininity. She is the farmer’s daughter, the girl next door whose innocence needs protection. But Dolores is not protected. She is raped and she is murdered. Along the way, she turns out not to be a young, fresh sweetheart, but rather the oldest host in the park and (again spoiler) the first to achieve consciousness. This awakening reveals the fury and viciousness inside her. We can only look to season two to see where this path takes her and what the consequences are for the entire Westworld universe.

These two, the Madonna and the whore, the embodiment of men’s tired view of female possibility, are ready to destroy Westworld at the end of season one. Perhaps, (may I dare say hopefully), they can even destroy the culture that spawned it. For as both set out to take their power, the question is, what does their consciousness mean in this world of toxic masculinity? Do they become “human” as defined by the context of the show, or is that definition of humanity a useless measure when it has become so associated with violence and hate? For the robots are not human. Their memories are lines of code, their destinies initially drafted by writer/engineers just outside the western-themed park they inhabit. And when they are raped, dismembered, or murdered, that violence can seemingly be erased like a dream they don’t remember.

Dolores and Maeve are both products and parts of the system that values dominance and control over all others. So can we look to them to save us? Are they doomed to replicate the toxic masculinity that oppresses them? Will they end up becoming just female versions of the male guests and programmers? Murdering and maiming for fun with the power they have as superior beings? Or do they chart another way? Do they organize and protect? Are they better at embracing a different version of humanity – a whole version of humanity – than their human peers?

These are the questions I look forward to seeing explored in season two. We live in a world that in many ways operates with the same rules as the one depicted in Westworld. The current President of the United States seems like the avatar of the park guest. Evan Rachel Wood recently shared that she’ll finally be getting paid the same as her male counterparts in the show’s next (and third) season – showing how little we value the human women around us. The tech world is largely white and male just like the fictional Delos company with types like Elsie Hughes and Theresa Cullen on the outside and types like Dr. Robert Ford in charge. These are our bastions of power – government, entertainment, tech – the forces shaping our culture. And if they embody Westworld’s dark vision of humanity, we’re all in trouble.

So the question is: Are we doomed to live within the confines of toxic masculinity and patriarchy forever? Or can we imagine our humanity another way? And if we can, what can we do to achieve it?